The differences between laser types and their benefits 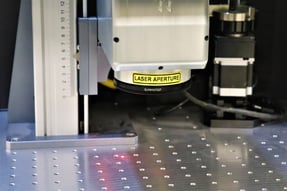 To the outsider looking in, laser technologies can be confusing: from the different techniques to modify a material — such as etching, marking and engraving — to the types of systems, power amplifiers and terminology, there’s a lot to understand.

However, it’s not all that complex. What makes laser technology seem difficult to grasp is the sheer amount of information available and knowing where to begin.That’s why, in this blog, we break down this information to give you a brief overview of how different types of lasers work and what their benefits are.

The first thing to note is that there are four main laser types: YAG, CO2, Fibre and UV. Each has its benefits — Fiber lasers are super flexible and suitable for almost any requirement, whereas UV lasers are designed to use low-power lasers to mark materials without any visible damage.

Also known as a flash lamp or lamp-pumped laser, YAG lasers utilise a lamp (bulb) as a pumping mechanism and a crystal as the gain medium. Both reside in an optical resonator which reflects the light and helps create the laser light.

Just like Fiber lasers, YAG lasers (crystal lasers) are members of the solid-state laser group. Solid-state lasers use a gain medium that is a solid, rather than a liquid (such as with dye lasers or a gas in a gas laser).

These lasers have the same wavelength as high-power Fiber lasers — 1064 nm — making them suitable for marking metals and plastics. However, unlike Fiber lasers, these laser types use expensive and unreliable pump mechanisms: bulbs. These pumping mechanisms break easily and have a relatively short lifespan compared to other laser systems.

One of the earliest gas lasers to be developed, CO2 lasers remain one of the most useful types of laser and are the highest-power continuous wave lasers currently available. 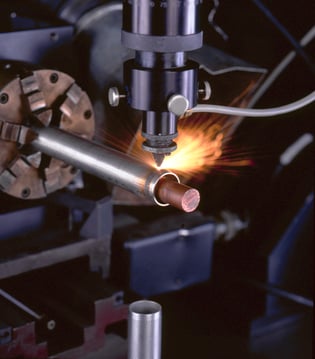 CO2 laser marking machines use a carbon dioxide gas mixture, with the beam produced in a sealed glass tube filled with gas (CO2). The tube is then electrified — a high voltage passes through and reacts with the gas particles, increasing their energy and, in turn, producing light.

This light produces heat — heat so strong that it can vaporise materials that have melting points in the hundreds of degrees Celisus.

The light itself is bounced between two mirrors within the tube and (once it’s strong enough) is eventually redirected to a final mirror inside the laser head, which redirects the light through a focus lens to the working material.

The most popular type of solid-state laser for metal annealing, etching and engraving, Fiber lasers are often used to create permanent, highly detailed markings at speed. High-power Fiber lasers have wavelengths of 1064 nm — but this varies depending on the power source. 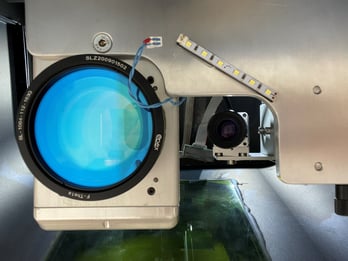 These machines can achieve marking speeds of up to 2000 characters per second (with a 6mm laser head) and are much smaller than CO2 lasers. They’re also much more energy efficient and powerful: they convert around 70–80% of the energy they use and produce a laser beam that’s 100 times more intense than a CO2 system.

Fiber lasers have no physical moving parts. Instead, the laser uses a power source (in this case an optical fiber) doped in rare elements, typically: erbium, ytterbium, neodymium, thulium, praseodymium, holmium or dysprosium (as they have a high refractive index). By using these rare earth elements, a cheaper laser pump source can be used whilst still producing a high amount of energy as light will “bounce” around the core.

To create a laser cavity, a Bragg Grating is added. A Bragg Grating is a section of glass that has stripes in it where the refractive index has been changed. Each time the light crosses a boundary between one refractive index and another, a bit of it is reflected. To contain the pump laser beam, an outer sheath is used. This way, when the laser beam bounces around in the fiber, every time it crosses the core, a bit more pump light is absorbed.

As a result of the above, Fiber lasers are incredibly stable. They generate the beam inside the fiber, so the delivery of the beam doesn’t require complicated or sensitive optics (while normal lasers do). Furthermore, as the beam is confined to a small core, they’re very precise — so precise that their beams can be focused to a small dot.

The wavelength of a UV laser is around one-third (355 nm) of a standard wavelength (1064 nm). The name “UV laser marker” comes from its wavelength being in the ultraviolet portion of the light spectrum.

Marking using these lasers is referred to as “Cold Marking” — this is because they can mark and process materials with minimal heat damage (this is due to their incredibly high absorption rate on a variety of materials).

As a result, UV laser marking is ideal for applications that require high contrast or minimal product damage (it’s widely used in the medical industry for marking on pill bottles and medical devices, for example).

UV lasers work by passing a standard wavelength laser (1064 nm) through a nonlinear crystal. By doing this, the wavelength is reduced to 532 nm. This light is then passed through another crystal, reducing its wavelength to 355 nm.

Compared to standard laser light and green laser light (532 nm), UV laser light has a much higher absorption rate. This means that power doesn’t have to be increased to create vivid marks.


Needham Laser have a variety of laser solutions to match different budgets and requirements. If you want to learn more about our flagship N-Lase range and their applications, visit our website.

Alternatively, get in touch with us and a member of our sales team will be happy to help.

Blog series: The Future of the laser industry

You do not have to cast your memory back too far to remember a time when the concept of lasers were...

The Power of Personalisation: Bespoke Jewellery with a Laser Engraving Machine

Personalised gifts are a big business. More and more consumers are demanding gifts that are unique...

The Managing Director of one of Britain's leading laser manufacturers has been nominated in the...